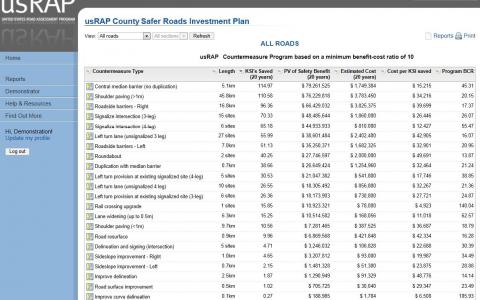 The United States Road Assessment Program (usRAP) is an innovative and proactive tool for analyzing the safety of a roadway and generating data-driven solutions for correcting hazards. Existing or newly-collected video of a road network is coded in 100-meter segments, and software, known as ViDA, outputs star ratings on a familiar 1-5 scale (for each star increase, the socioeconomic cost of crashes is halved on that road section). Additionally, ViDA will generate a safer roads investment plan, which is a ranked list of over 70 possible engineering solutions that meet a user-defined minimum cost-benefit target.

usRAP is NOT a substitute for professional engineering studies, Road Safety Audits (RSAs), or other activities performed by highway agencies and traffic engineers. Instead, it is a data-driven planning tool that provides unique additional benefits, including:

The first step in generating a safer roads investment program is that ViDA assigns star ratings to each roadway segment on the road network. A road safety score is determined for each road segment and the star ratings are assigned for specific bands of the road safety score. The road safety score and the star ratings, derived from the same data elements used to develop the safer roads investment plans, described above, are based on the presence or absence of design and traffic control features known to be related to safety for both roadways and intersections. The star ratings range from one star to five stars. One-star roads have the fewest safety-related design and traffic operational features. Five-star roads have many safety-related design and traffic control features. Separate star ratings are assigned for vehicle occupants, motorcyclists, bicyclists, and pedestrians because the features that affect crash frequencies for these various travel modes differ substantially. The star ratings consider factors related to both crash likelihood and crash protection. Star ratings are strongly influenced by traffic speeds on the roadway (whenever possible represented by the higher of the speed limit and the 85th percentile speed). The ViDA software can display maps of the star ratings for individual road sections.

Star ratings are not influenced by traffic volumes. The star rating concept has been extensively documented by the International Road Assessment Programme (iRAP). Previous research has demonstrated that the vehicle-occupant star ratings for roads are strongly related to fatal and serious injury crash frequencies; thus, it has been documented that road safety scores and star ratings do vary with the frequency of severe crashes. For more information on the global body of research that underpins ViDA, visit www.iRAP.org.

Once the star ratings have been established, the ViDA software assesses the engineering need at specific sites for nearly 70 specific countermeasures and performs a benefit-cost analysis of every countermeasure for which a need is identified. The benefits of countermeasures are estimated by determining the change in the road safety score that would result from implementation of the countermeasure. Normally all countermeasures are considered for each road network, although the software can also be used to target specific countermeasure types. The user specifies a minimum benefit-cost ratio which all projects in the final improvement program must meet. While site-specific crash data are not required, network-wide totals for fatal and serious-injury crashes are desirable for calibration to local conditions. The technical approach has been documented by iRAP (www.iRAP.org for details). While star ratings are based on the presence or absence of design features and therefore are not influenced by traffic volume data, safer roads investment plans ARE impacted by VMT because they explicitly consider estimates of how many lives could be saved over 20 years if each improvement were made.